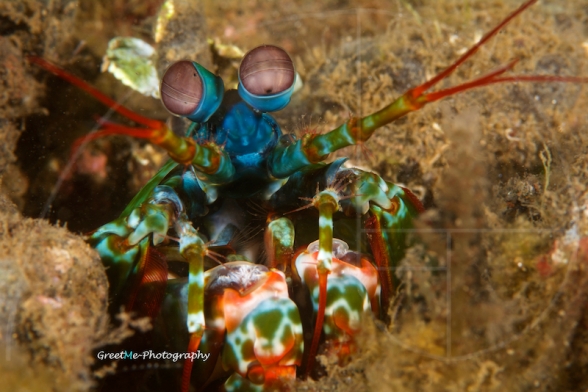 The first thing that one notices about a mantis shrimp are its strange and curious eyes. Able to move them separately they scan the environment for prey and predator alike. Their ultraviolet vision is thought to be helpful to enhance the contrast of animals moving in the water column.

However, the most extreme characteristic of a mantis shrimp is its devastating striking power! Mantis shrimp, like the peacock mantis in this photo, can hit a prey animal with a force ranging between 400 to 1501 Newton!

But that is not all, because of a spring mechanism, the appendages are thrown with such a speed (80km/h) that cavitation forces occur. Cavitation being the process where bubbles in a liquid are created by a very fast movement, followed by a rapid collapse of these bubbles, producing a shock wave. Thus a second blow hits the victim, this time induced by the collapse of the cavitation bubbles.

Apparently the strike of a mantis can be compared to that of a .22 caliber handgun! Mantis shrimp can hit with such a force that they are known to break the domes of cameras that have been placed within striking distance by over-enthusiastic photographers.

The reason why mantis shrimp do not hurt themselves when they crush shells or impale fish is that its appendages are made of layered hydroxyapatite, a material highly resistant to fracturing and therefor used in many ways by man, for instance for orthopaedic implants.

How wonderful and strange life can be! 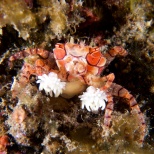 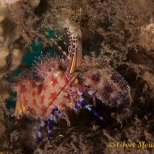 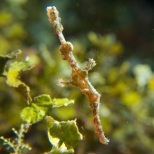